Both as an engineer and shamanka, I sit in awe of trees. 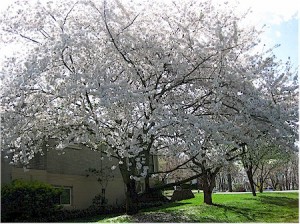 During the winter I marvel at their architecture. It is the perfect example of balancing the need to grow in ways that capture the light while maintaining the core structure. I also know that if humans tried to build anything similar, it would not stand the test of time. Only a living structure could sway with the winds of change and remain intact.

At this time of year, I marvel at the energy necessary to draw sap up three stories without a pump and push out thousands of buds all at once. It has everything to do with frozen sap and gas bubbles in the cellular fibers of the sap wood and the barometric pressure differences between the inside and outside of the tree. Equally important is the sap that runs back down. That’s what plugs the wounds in the tree. Technically it’s a form of latex. And, retreating sap is what’s collected for syrup.

I think of the elaborate mess humans would have to create to set up such a complicated hydraulic system to continuously provide adequate pressure to all those branches for pushing out leaves and growing limbs. Plus, it would need an intricate temperature control device to keep such a sticky substance moving.

Trees are not the silent statues of the forest either. They speak in a variety of ways and they can hear each other. I saw a documentary once where a musician inserted sensitive piezo mics into the sap wood of a tree and recorded it. I was amazed. It was a very steady rhythm that sounded like a conga drum player. I haven’t been able to find a clip of it on the web yet, but if you do, or if you saw that show too, let me know.

If a tree falls in the woods, is it heard? Yes, by the other trees. There is a bit of research on the ultrasonic and superluminal waves emitted by trees. For years, ultrasound has been used to test the quality and wood density of a standing tree. And light measuring equipment has been used to study the health of a forest and density of the canopy, because growing trees need light. But, very few scientists have used similar equipment to listen to trees.

Physicist Ed Wagner has spent a little time listening to trees. He has detected electrical standing waves between trees and recorded blips of them communicating. He calls these transmissions “W-Waves” and has measured them traveling up to three feet per second.

I have to believe that there is intelligent design in nature that could elegantly engineer something so stately and create a being to appreciate it at so many levels.

While all of these scientific findings are fascinating, they don’t really explain the communion I feel with trees and how they speak to my soul. For that, I don’t even need an explanation that satisfies my curious brain. I just receive the gift and marvel at the wonder of it. And that, to me, is the most blessed thing about trees.